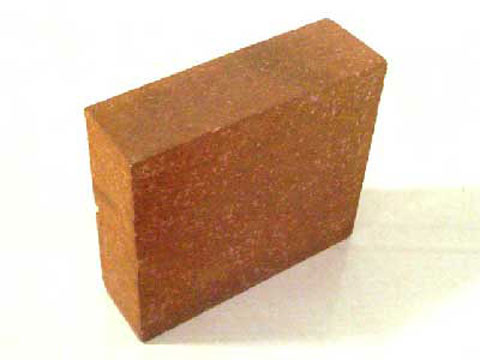 Over the 20-year period of magnesia-spinel brick use, several distinct evolutionary steps in composition formulation can be identified. These distinct steps are generally referred to as ‘generation’ within the refractory industry. First generation magnesia-spinel brick are vased on the use of magnesia and in situ spinet. The in situ spinel is formed by adding small amounts of relatively coarse alumina to the brick to form spinet during firing. Second generation magnesia-spinel brick are characterized by the use of preformed spinet in the brick. The use of preformed spinel allowed more spinel to be added to the brick, which improved thermal shock resistance and lowered thermal expansion and conductivity. The preformed spinet grain added to the composition can be either or fused. Third generation magnesia-spinel brick are characterized by the use of preformed spinet in combination with a very fine alumina addition. The fine alumina reacts with the magnesia fines in the mix during firing to form in situ spinet, commonly referred to as a spinet matrix. The addition of fine alumina to the refractory composition lowers porosity, permeability, and improves intermediate temperature strength at temperatures of above 2300。F.

What Is Magnesia Alumina Spinel Brick Used For

The applications of magnesia-spinel bricks are mainly reflected in the following two aspects:

Firstly, magnesia-spinel bricks are used to make ladle castables, which can greatly improve the erosion resistance of steel linings. The preparation of high-quality pre-synthesized spinel provides new raw materials for the production of unshaped and shaped high-purity refractories.

Secondly, Magnesium spinel brick is used in cement rotary kiln instead of magnesia chrome brick, which not only avoids chrome pollution, but also has good anti-flaking characteristics.